How long have you owned this truck?
Just over 2 years

Is there any unique stories or history behind this truck?
There are about a thousand stories with this truck... Everything from falling off a tow truck, to breaking ball joints while being towed on a flat bed. You name it, its done it. The truck itself started off as a budget build, but while waiting for the bags and four link to show up Corey said, &quot;Lets BD it&quot;, right away I said NO. But after a sleepless night I started to see the light and the rest is history. 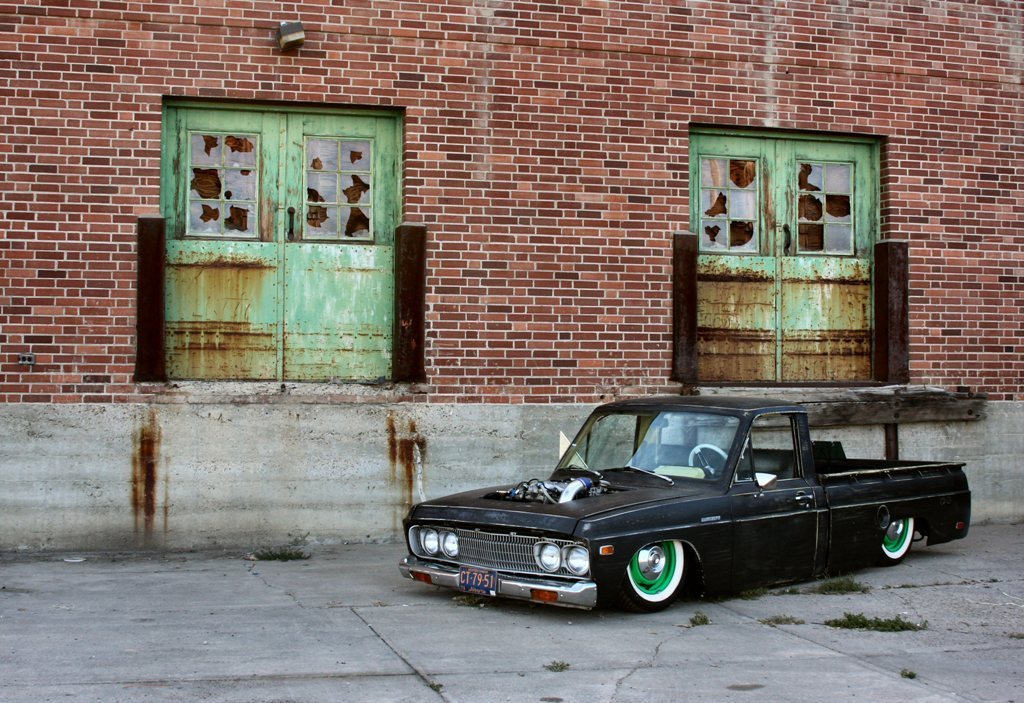 Did you consider any other projects before starting this one?
This is the truck I have been looking a long time for. Personally I never knew Mazda made it, I was actually looking for a Ford Courier. Luckily I found this instead.

Who helped you build it?
Corey and Seth

What makes your truck unique from other ones?
Never seeing another one at a show. The B1800 is a rarity, the 1800 engine only came in the Ford Courier and the 1600 in the Mazda. It wasn&#039;t until 77 that Mazda started to put the B1800 and the B2000 in their own trucks. So somehow mine got the bigger engine 4 years before the rest. I have the badges and vehicle identification plate to prove it.

What feature do you like most?
This is a hard one, I like the truck the best... just the over all look I guess. 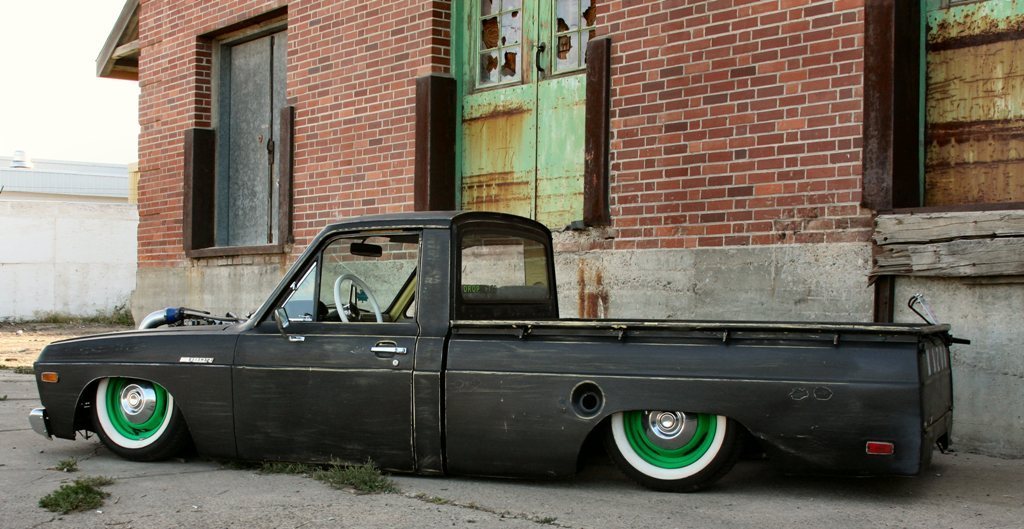 If there was not limitation on money, what singe modification would you choose?
Find a way to section and BD an engine and still be able to run a stock hood.

What does your friends and family say about this truck?
Surprisingly my father was impressed and even said he was proud of me. Which is nice, unfortunately he lives across this country in Ottawa so we don&#039;t get any father son tinker time. The girlfriend thinks its a money pit. I threatened her with her coming home one day and having a needle in my arm, I said &quot;Gotta pass the time some how, how about a heroin addiction?&quot; She hasn&#039;t said anything since.

Any memorable moments with it?
Every time I drive it a remember something. Like, don&#039;t forget to top off your differential fluid. Its amazing what a pinion looks like when the bearing goes. 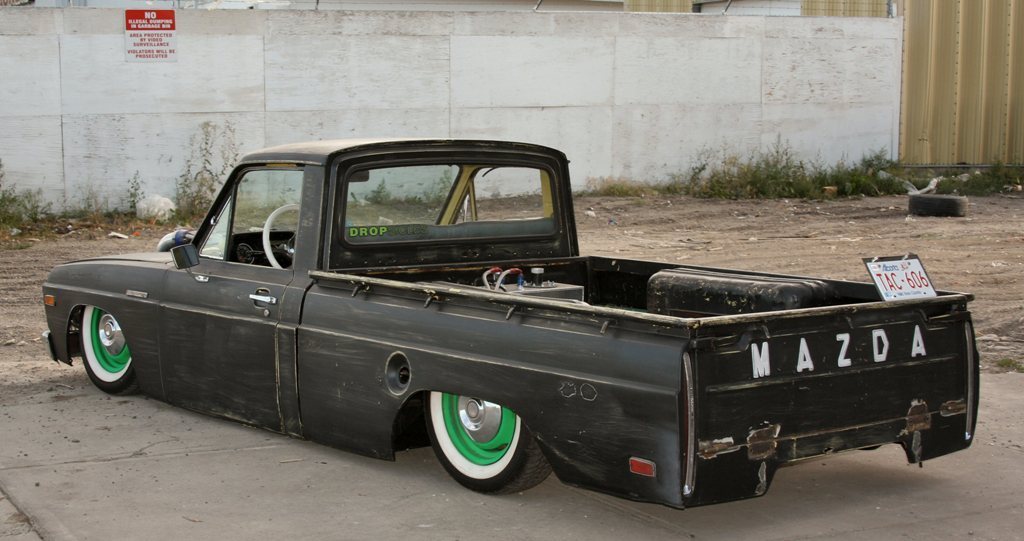 What are your future plans for this truck?
As we speak, the truck is getting torn apart. It will be getting a 1 inch stock floor body drop, accompanied with a 2.5 inch roof chop. The stock bench seat will be taken out in favor of a &quot;one off&quot; set of bomber buckets with a bum pad. A 49 Ford dash sits waiting to be narrowed and installed (only time will tell if we get that done). All the running gear will be swapped out for Toyota spindles and a narrowed Toyota rear end. The truck will maintain its &quot;found in a field&quot; look, but the paint color could possibly change, I haven&#039;t completely decided. Upgraded engine and auto transmission. Wood floor bed (old barn wood)... and I&#039;m sure a million more minor things as the truck gets put back together.

Owner: Stephen Woodward
User Name: at dusk
MazdaBscene Member Since: August 7, 2007
Occupation: Designer
Location: Lethbridge, Alberta, Canada
Club Affiliation: DROPsicles
Ride: 1973 Mazda B1800
Mileage: 76000 ( but really who knows, it rolls over at 100,000)
Interior: stock bench seat, stock door skins, stock dash, its KM/H instead of MPH (its from 1973)
Exterior: 74 Datsun 620 grill, 89 caddy tail lights, 4&quot; traditional body drop
Engine: stock B1800, cold air intake, all the useless stuff removed
Suspension: FBSS, slam specialties re6 all around, 8 - 1/2 valves, 2 viair 380s (wired for 6 and for remote bag operation)
Audio: none
Wheels and Tires: stock wheels painted &quot;zonker green&quot; and white wall tires (14&quot;)
Work performed by/Location: Corey Miller, Seth Vanderzweep, and myself. Done in my buddies garage in Calgary AB until we relocated to current location.
Thanks from owner: Thanks to the many friends that helped me out and continue to, Corey from DROPsicles, and Seth from Dragnfly minis. Thanks to the numerous girl friends who never got a ride in it, and thanks to Randi (current gf) lets see how long she can stick it out for.. 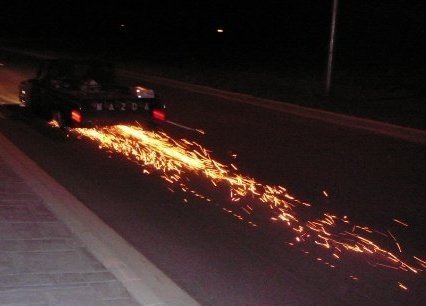 No one has commented yet, be the first to post!
Page 1 of 0