Alrighty, I needed to do my rear shackle bushes so I figure, why not a write up as well (as there isn't one currently I think).

Need/want:
If you NEED to replace you may not care too much about what you use, so use rubber, it's cheaper. BUY SOME nolathane anyway.
If you WANT to... use nolathane, it's awesome stuff. Check it out online. BUY SOME.

Step 1:
Drink first bourbon, it'll put you in a good mood as you're about to beat stubborn parts and get angry.
Step 1.2: Turn off phone... you never get rung? you will when you're under the truck.
Turn on stereo, turn to 7

Step 2:
Chock front wheels and jack up back of vehicle (under diff housing) quite high so that you have full suspension travel + some.
Use axle stands to hold up FRAME of truck (lets you alter load on suspension with jack)

Step 3:
Take nuts off side of shackle, remove plate.

Step 4:
Turn stereo to 11, put on ear muffs.
Suspension should be more or less at full extension, piss about with it till it has little/no load on shackle.
Thread nuts back to end of shackle pins and give em a bash with the hammer, use pry bar to put constant tension in the direction of where you're hitting them (center of vehicle) and hit it rapidly, just keep on going, if you have a slide hammer, I hate you, use that!

Step 5:
Pry/pull/bash/poke out the old bushes.

Step 6:
Dance a viking victory dance. (because your death metal comes from the land of the vikings and you are glad I recommended In Flames)

Step 9:
Turn stereo to 8.5
Grease new bushes, inside and either end, DON'T grease the &quot;pressed&quot; surfaces aka outside of bush, grease shackle pins.

Step 11:
Put thing you bashed out and cleaned/greased back in.
You'll need to bash that too. But you like bashing.

Step 12:
Nuts.washers. Tighten.
If you haven't done the other side at the same time. Repeat steps 3-12 (you might need 4 bourbons)

Step 13:
Raise everything back up, take out axle stands, lower everything.

Step 14:
Turn stereo back to 11.
Dance victory dance, drink another victory bourbon, sacrifice something in my name.
Tell neighbor to shut it or you'll sacrifice him too.
Throw old bushes into neighbors yard.

Enjoy your new bushes!
Bushes and a bourbon: 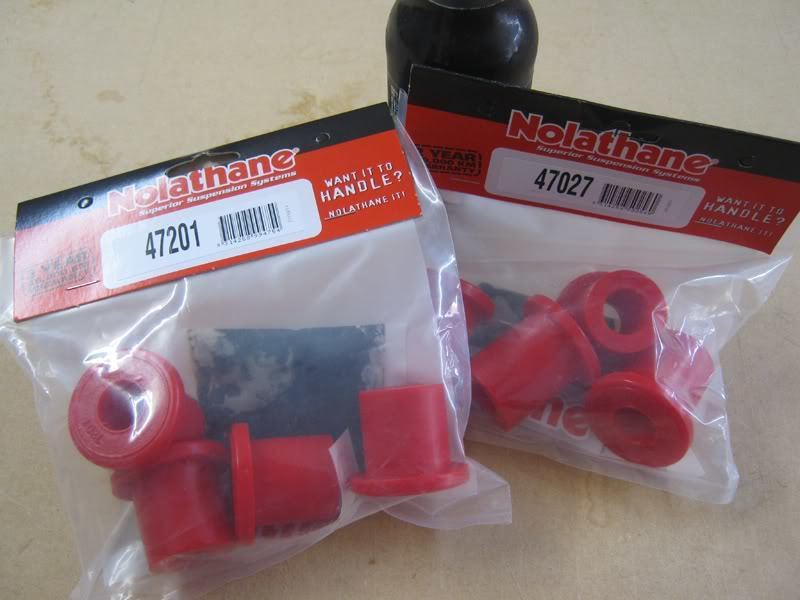 Nuts off, plate off 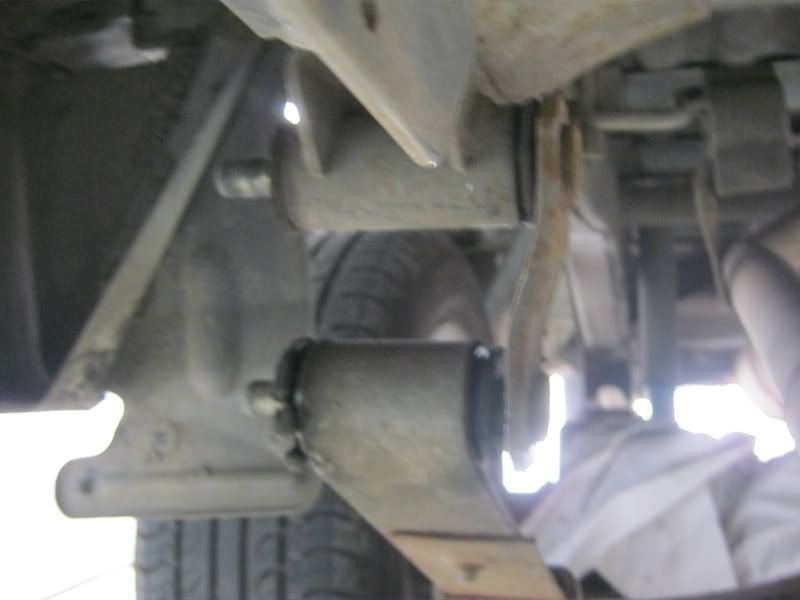 Out! Taken while dancing. 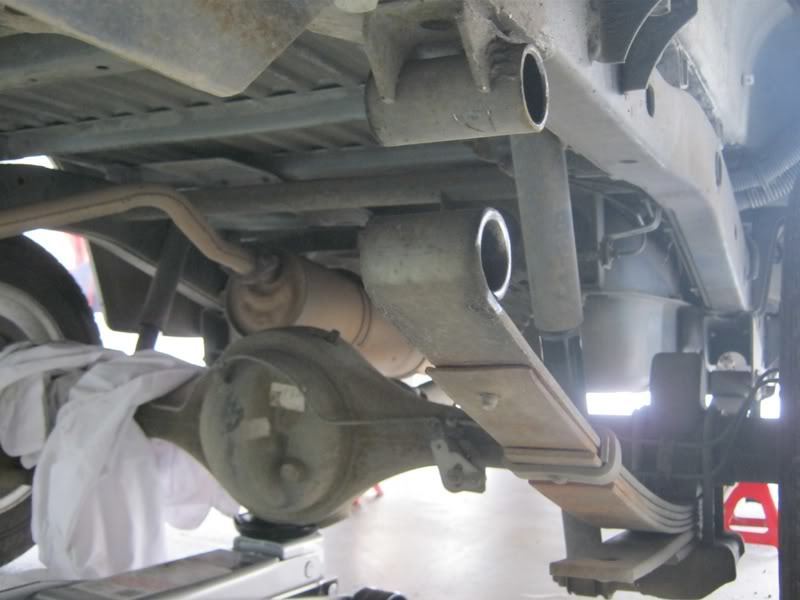 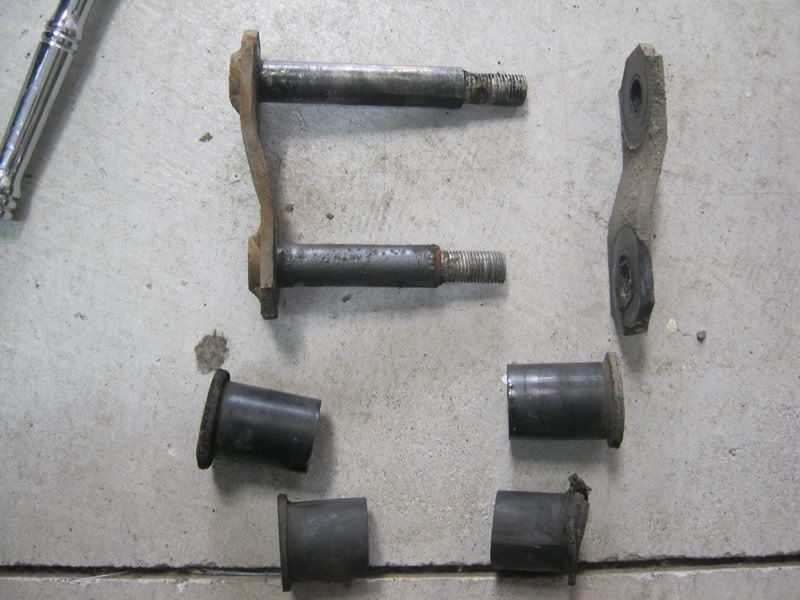 In you go dearies! 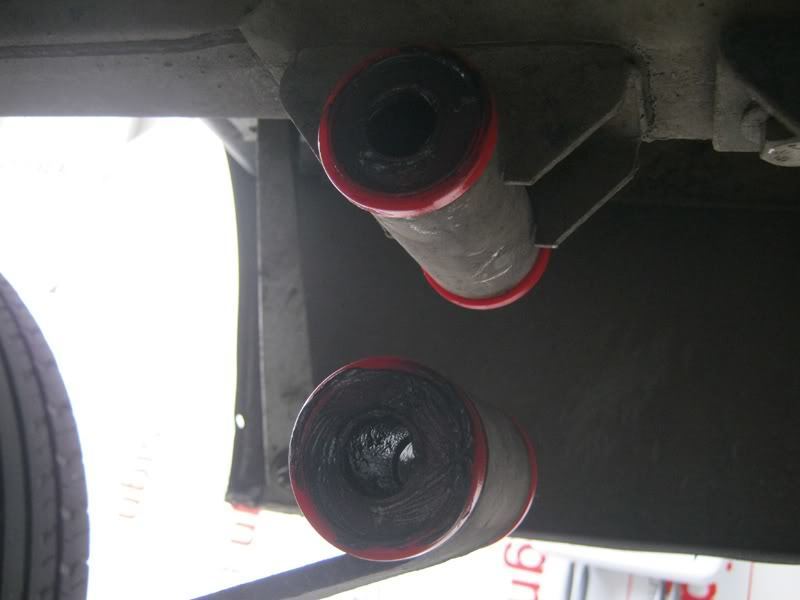 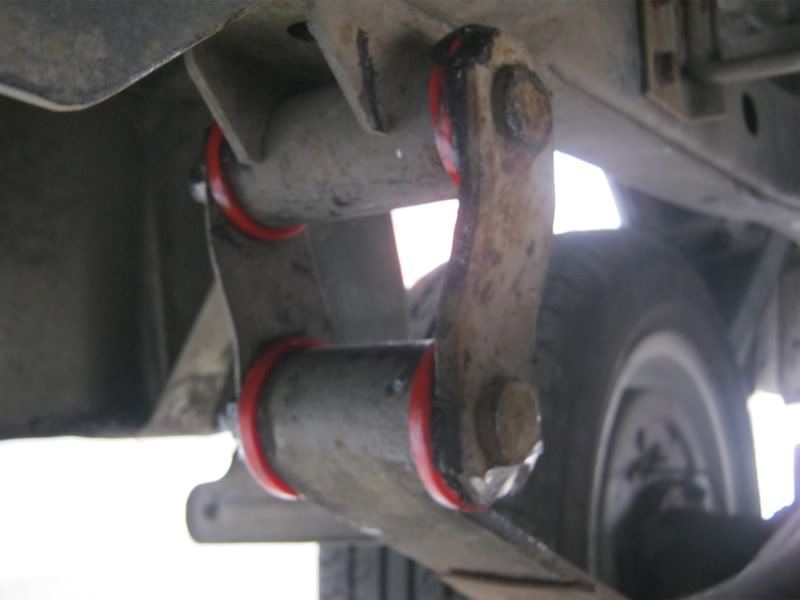 Cusser   +1y
Oh, I think I &quot;get&quot; it !!! This for replacement of the rear leaf spring bushings.

2. Where did you buy those bushings, and did you not like rubber ones?

3. Is this pretty straightforward, like you don't need a press, or had too much trouble re-installing them?
Post was last edited on Jan 28, 2012 11:01. This post has been edited 1 times.

Last time I did leaf spring and shackle bushings I had to make one set of them from old VW strut bushings cut up to fit around the shackle stud!! (worked great, though!)

Its about time we have a full set that fits!!

Also, for removing the old ones..If you have a lot of trouble, I sometimes burn them out.

emjay   +1y
nicely written Jenko, something that I found helps instead of using the jack under the diff is to put jack stands on both the frame AND the axle, and to use a scissor jack in between the frame and the leaves. When I adjusted the spacing this way, the shackle with bolts came out a lot easier with less pounding.


Hey, not so fast. I can't find where Nolathane sells outside of Australia and New Zealand, where about 153 people live !!! So where to get in the USA ???

I couldn't find but one listing in Moog (K9948) but don't know which one this fits or what its dimensions are (thanks, Moog !!!).

midnightmike   +1y
ebay is one place to get them, they also have strut rod bushings which are a plus

I use bushings from this vendor. They fit fine. Not sure if this item is the same ones.

The front, leaf bushings I got from RockAuto.com 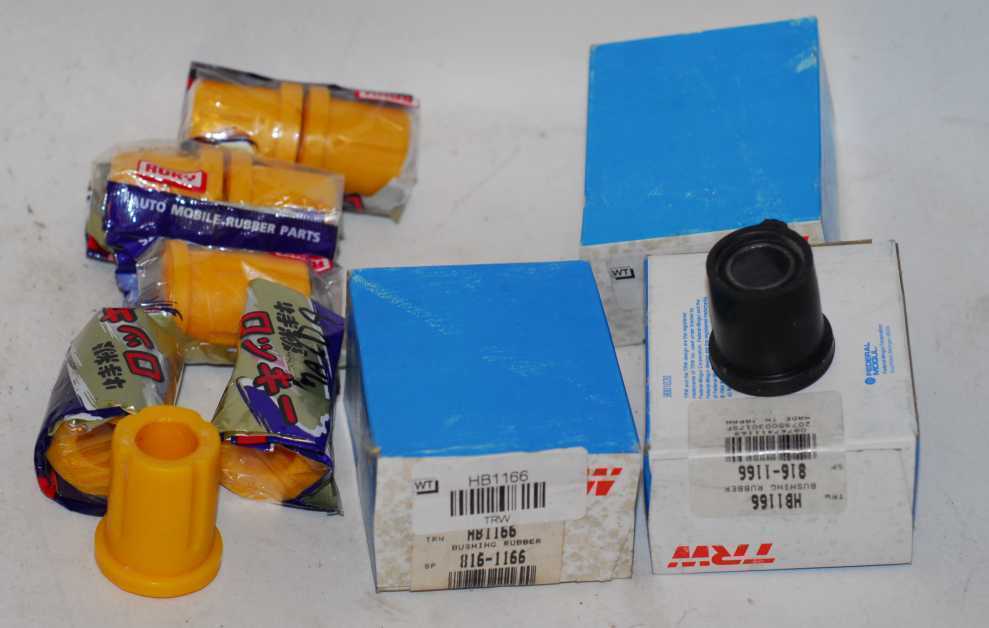 Great write up. My shackle bolts had heavy rust. I had to use C clamps to force them out, and course sand paper to clean them up.

jenko   +1y
Emjay, that's a genius idea!
Cusser, yup, pack comes with enough for both sides.
Nolathane &gt; rubber (IMO)
I got them off a friend who does suspension, made in Australia widely available here, they shouldn't have a problem sending you some
I pulled them out by hand mostly, with your salting of roads you may have more corrosion which has expanded and stuck the bush in there, the lower joint isn't fully closed so you can get a screwdriver in and force it open if you need too. Or if they're stuck in there SD's trick will work.. rubber + fire = no rubber.
Cleaned them out and went in mostly by hand, then a bit of rubber mallet persuasion.
Thanks for the questions and comments

p.s: It feels better now, didn't think it'd make much difference but it slides better and less &quot;bounce/judder&quot; under accl out of corners and tracks a little straighter too.


No to anything that lists Ford and Ford Ranger. Starting with 1994 year, Mazda trucks were essentially same as Rangers, made on same line in USA.