dropped90(justin)   +1y
see i can pull wires off and replace them. that seems simple enough and makes sense. question is is what exactly is the big 3 upgrade? you guys lost me with all the electrical words and numbers and stuff. when doing this can i also clean out more wires from my engine bay? that would be sweet as there is already no computer and all emissions wires are gone.


some consider upgrading the 1.battery, 2.alternator and 3.wiring as the b3...but if you'll check out this article from the 12volt.com

it explains it pretty well as simply improving the current capacity of three cables: 1) alternator positive to battery positive, 2) battery negative to chassis, and 3) engine ground to chassis.

sorry about all the tech/termonology, it can be a bore for sure....as far as on your truck, if all the emissions stuff is gone, and the ecu, you've pretty well got all you can out of it, now if you just needed something to do, you could clean up the factory harnesses, by this I mean open them up, and consolidate the grounds....I think when I did the rear of my truck there was like 6 grounds running thru the harness with several different splices in the cables and only a couple of actual points where it was grounded to the chassis....splices cause resistance, so best policy it to have as few as possible, so I ran one main ground, and tapped off of it at two or three different points (near the tail lights &amp; where I have my fuel pump located) to assure that a ground is in close proximity of them. You can do the same on the front harness too, I know there is one splice in the grounds on the front harness where like 6 wires come together to a terminal, and it's bolted to the inner fender at a ground point.....front drivers side to be exact, it would be better to have one large ground running thru the harness, and landed at a couple ground points than 6 wires coming together like that....the closer you ground to the light/device that is getting power the better off you are.

just give me a shout if you need anything else...

dropped90(justin)   +1y
cool man i appreciate it. i got the battery and the alt. now i just need to do all the wiring like you said. so how do i put another battery in? ive already got an optima but i wanna run another one and parrallel them?

nytrdr24   +1y
I ordered a Taylor dual battery kit, and have mounted my optima inside the bed infront of the rear wheel well on the passenger side...it fits real well there....i've mounted the second tray on the driver's side in the same location, but haven't gotten the second battery yet, so I haven't ran the cables

Here is a link to the kit on summit's site

basically I drilled two holes inside the bed wall installed two grommets, ran the negative down to the frame, and ran the positive under the cab to the positive terminal of the starter, and took a short piece of the ground cable and ran it from the starters negative terminal to the frame....there is a positive wire that comes off the main fuse block that goes to the positive starter terminal aswell, I managed to get them under the same lug when I crimped it...I purchased a crimp tool from this place
since the cables are #2 awg it is hard to find a crimp tool locally plus it's nice to have one if you do much electrical/stereo work on your vehicles...
when I get ready to install the other battery, I already have the holes drilled there, &amp; grommet's installed, so all I have to do is drop another negative cable down &amp; land it on the frame, and run a positive under the bed to the other battery and land it on the positive cable....it wouldn't be a bad idea to get a dual battery current controler
which will allow you to switch between batteries while you are charging them with the engine running (with both hooked together the alternator won't ever fully be able to charge two batteries) so you charge one, then swap to the other battery, it will also turn both off (kinda like a theft deterent) or turn both on when you need extra power to start your vehicle...

hopefully that isn't too confusing, I don't have any pics at the moment, but will try to get a couple for you this weekend time permitting...

I know I'm a little late for the pics of where I mounted the battery trays, but here goes (excuse the mess in the bed) 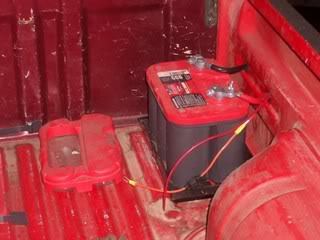 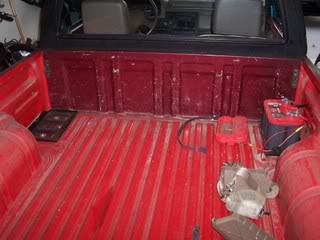