farmer joe   +1y
well im finally coming down to it. i should be tearin the pup apart next month. its in dire need of fixin up. so fixed up it will get!

to begin, im going to be building a isuzu hybrid engine. its going to be my impulse bottom end with a luv head. the impulse g200 has stock flattop pistons, and 9.5:1 compression. with the luv g180 head it should have something around 11:1 compression.

then im gonna send one of my core cams off to delta cams and have it reground to a 272in/272ex .425lift spec. it should have a nice 'little' lope to it when its all together.

im going to keep using the stock intake with the weber. the intake will have some work done to it though. im going to cut out the material thats between the stock holes right under the carb. thatll get cut out and then the mouth of the intake will be smoothed out, and matched to the weber adapter. i still dont know what weber im going to use yet. id like to run a 38/38, but ill more than likely run a jetted up 32/36.

to get the truck running faster im going to run the stock exhaust manifold untill i have the engine broken in and running well. right now its the stock manifold with a 2 1/8 head pipe to a 2 1/2 exhaust. so that will be fine for a while. ill eventually order a pacesetter form summit, and have a full 2 1/2in system with a summit race muffler fabbed up.

im also going to clean up the engine bay and the underneath of the truck while the motors out. ive had a bad rear tranny seal for a while, and its slung 30w everywhere.

i also have to put a new rearend in it. right now its making all kinds of ugly noises. so i at least need a new 4.10 geared center chunk that i can weld up.

so as of now, i have most of the parts for the engine build. just need the bottom end kit, and i need to rebuild the new head. im going on the search for a new third member soon. id also like to find a 5 speed for it. but untill i do the good ol' 4 on the floor is going back in it.

so as i get stuff going, ill update the thread. i take lots of pics of everything, so it might be a learning experiance for some!

farmer joe   +1y
well i finally blew up another rearend, so its time to tear it down for the rebuild.

i ordered the re-ring w/ mains engine kit tonite. so i should be able to have the bottom end done by the beginning of next month. ive also gotta get a head rebuilt, and get a parts truck with a 5 speed in it.

im also going to be putting an s10 rearend in it for strength. this rearend i blew up is the second with this impulse motor. so its time for something a little stronger.

im gonna start pullin parts off the pup this week to put on the luv, so ill get some pics of the teardown.

/// xception   +1y
Let us know when the construction begins. Post some pics as well. Like to see an old school ride built.

farmer joe   +1y
yeah ill be sure to take lots of pictures. i should be startin on it next week once were done baggin my buddys luv.

farmer joe   +1y
well i got the engine kit today. cost me 223bux. its a re-ring kit with mains. im gonna be tearin the truck apart next week hopefully so i can get the block and the head to the machine shop. gonna have them hot tanked, and the surfaces on the head and the block surfaced.

heres a pic of the engine kit... 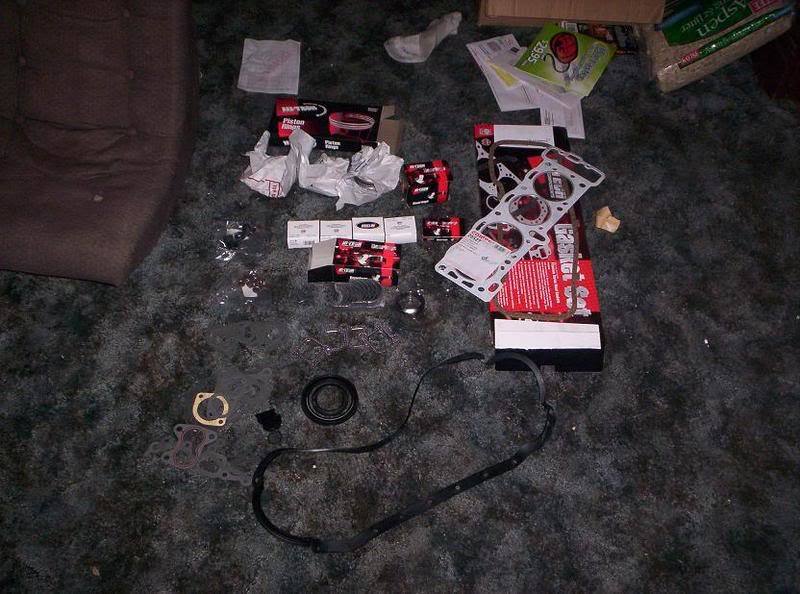 isuzueh   +1y
hey man where did you pick up that engine kit???