low95xlt   +1y
damn husker we should have made a wager or something on this game totally forgot until i was flippin thru channels while watchign the detroit chicago out door hockey game... go Clemson

huskerdually   +1y
I scare my family watching the games and this one was bad. Jumping up and down screaming. I run through the house.

Stupid OU screwed it all up. If they would have won it would have been great for the big 12. 9 times out of 10 I think they would be UF.

Big 12 could not get a call in any of their games, it was flat out ridiculous.

Michigan didn't even make a bowl did they. That's just too bad.

huskerdually   +1y
Here's one popping up in emails. It's Ndamukong Suh he's are defensive tackle and is probably one of the best in college football. He intercepted a pass and ran it in for a touchdown. The quarterback(who is the coaches son) tried to tackle him but since he's like 6' 5&quot; and 320# he didn't stand a chance. Suh stiffed arm him and high stepped him, looked like a running back. It was his 3rd touchdown this year 2 on defense and 1 on offense. They bring him in on short yardage as a fullback. 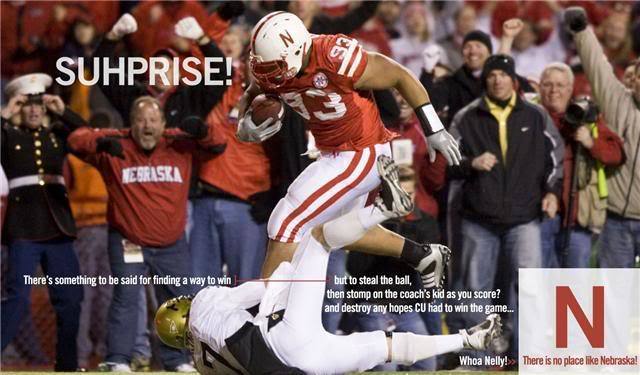 Thought I would share cause Colorado sucks. I don't think he actually stepped on him though just the angle of the picture.

low95xlt   +1y
yea this yr was a rebuilding get ur butt kicked by teams yr for U of M hey at least they won a couple games unlike our 0-16 NFL team worst record in NFL history.. team went straight to hall of fame for that one......
Page 1 of 1