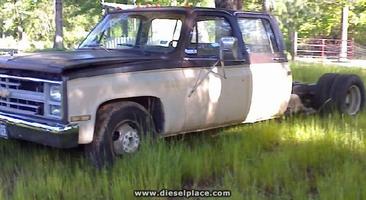 A swift kick in the ass when I pulled in with it on a trailer from the wife.

350 TBI and 4 Speed Tranny has been removed. Will be replaced with a 12v Cummins and 5 speed. Going to get it to push atleast 400 horses to the ground with 6&quot; exhaust and a single offset stack.

Stock but rust free. Plans so far stock appearing with a small cowl hood and chrome.

Two bench seat will be replaced with some Late Model 40/20/40 and Katzkins Leathers.

Going to be something just to hear some tunes.

A few things are on the drawing board but to sum it up in two words......&quot;BAGGED&quot; and &quot;DRAGGED&quot;

Still up for discussion.

Waiting on getting a shop built before putting another wrench on it.